The non-filling of vacancies has badly impacted the administrative as well as executive efficiency of the department. More than 50% of the sanctioned strength as notified way back in 1981 are lying vacant where-as the assets have expanded manifold even more than 300%. This non filling of vacancies has given rise to the culture of Ad-hocism in all the corporations. The government had created few much needed posts of Executive Director’s, Superintending Engineers and Executive Engineers vide a government order but has failed to promote even a single officers eligible against those posts, which totally negates the purpose of their creation. The government has been procrastinating the process of filling up of the vacant posts, which is evident that a single promotion file of Assistant Engineer’s to be promoted as Assistant Executive Engineer’s is pending for disposal for two months in the Administrative Department. The engineers have been thrust with extra burden of additional charge of multiple offices/assignments/installations and are forced to work round the clock in view of severe dearth of staff in order to provide uninterrupted power supply to the consumers. This has seriously impacted their productivity, administrative efficiency besides taking a toll on the mental and physical health of the officials.

JKEEGA has been seeking the appointment of worthy Principal Secretary to share their concerns about the non-filling of vacancies, ad-hocism and inefficiency of the administrative department viz-a viz the pertinent issue, also to remind him of the various promotion files stuck in the e-office at various levels for months all-together without any proper disposal, But even this has proved to be a distant dream, our simple plea for seeking a mere appointment for meeting the worthy Principal Secretary has even not been approved, with the result we were left with no option but to go public with our appeal. The no. of engineering posts lying vacant presently in various corporations of erstwhile JKPDD

Name of the Posts :

A total of about 661 engineering cadre posts are lying vacant in the department, which are being manned on ad-hoc basis by the existing engineers as additional charges, which is not only unfair, merciless but also against basic employ rights. Besides this no recruitment has been done since 2015 at Junior Engineer level, which is the basic building block of the fraternity and plays a significant job in implementation of various schemes, realization of revenue and operation and maintenance of all important electrical infrastructure and installations for maintaining quality and reliability of power supply.

In addition to this, 20 administrative divisions, 103 subdivisions are lying headless for so many months; this again speaks volumes about the kind of administrative apathy, callousness and discriminative approach with which the department and its official are being treated. By denying the officials timely promotions they not only have to suffer monetarily but also at the cost of their much desired and needed career progression

In light of above JKEEGA expresses strong remonstration over the non- filling up of the clear cut vacancies available at various levels of the Power Development Department as it has de-motivated the Graduate Engineering fraternity as large number of engineers have retired and many more are retiring who were/are eligible for placement to higher levels when all the formalities had been completed and are forced to retire on lower ranks thus impacting their Pre and post retirement emoluments and adding to their miseries. This approach of the administration has created deep sense of dissatisfaction and resentment among the cadres and hurts the morale of the Graduate Engineers in general.

It is also pertinent to mention that even Transfers have been stalled in the department for the past many years, people who have completed their requisite stay on hard postings away from their hometowns have been clamoring for their inter-corporation transfers by submitting representations for the same, they have also been denied on one pretext or the other, however blue eyed people manage to get multiple transfers within few months based on their predilections and convenience at corporation level for reasons best known to them.

JKEEGA had also sought the creation of much needed enforcement wing for keeping better check on pilferage, power theft and also to arrest the distribution losses, and creation of various divisions which has been guaranteed in S0-109 for reorganization of the department, as similar enforcement wings exist nationwide in all the Discoms which have been able to reduce the losses to manageable levels. But the Administration does not seem to pay heed to just demands raised by Graduate Engineering Fraternity besides this they also seem to have no regard for their own promises and pledges which they have made with the association from time to time.

The Jammu and Kashmir Engineering Graduates Association is immensely hopeful and optimistic that the afore¬mentioned issues of the Engineering fraternity would be addressed under able and dynamic leadership of Worthy Principal Secretary JKPDD, Also strongly appeals to him to kindly fulfil the aspirations of the employees and infuse a renewed zeal among the cadres and take immediate necessary steps to alleviate their miseries and sufferings which have increased manifold courtesy years of antipathy and unfair treatment . 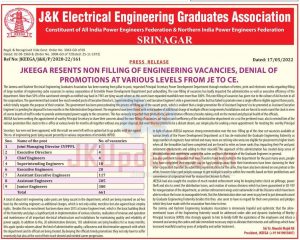 Do you Need Website, Mobile App or Software check our Services Below