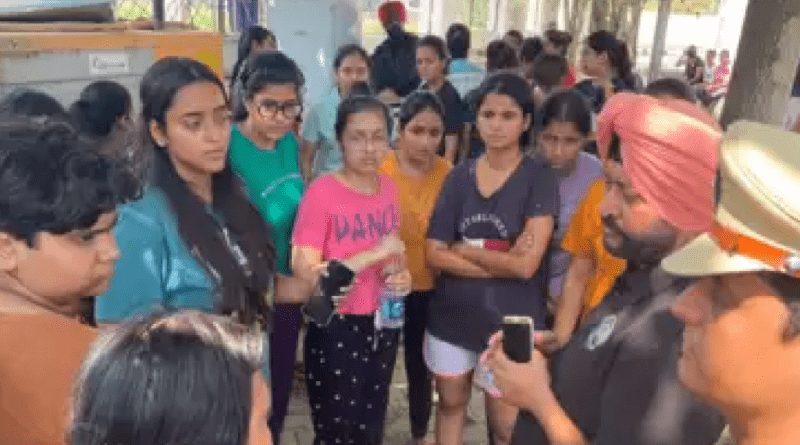 The university administration denied rumours that social media users made and uploaded videos of a number of female pupils.
Massive protests were organised by students at a private institution in Mohali, Punjab, in response to “rumours” that some inappropriate films of several female students had been captured.

Following the demonstrations that occurred after midnight on the Chandigarh University campus, which is located on the Ludhiana-Chandigarh route, Chief Minister Bhagwant Mann on Sunday ordered an investigation into the situation.

The reports that tapes of a number of female students were made and posted on social media, however, were denied by the university administration.

“At the preliminary level, we investigated and could not uncover that tapes of other students were made,” Dr. Arvinder Singh Kang, director of Chandigarh University’s Student Welfare, stated. “University officials registered a FIR into the incident in order to conduct a fair inquiry. There is no truth to the rumours that 60 pupils had MMS and that several students had tried suicide

Protests, according to Mohali police, were caused by “rumours.”
Vivek Sheel Soni, the senior superintendent of police in Mohali, told reporters that there were protests at the university as a result of the “rumour” that some female students’ tapes had been made.

He said that a woman student has been arrested and that a FIR has been filed in the case under the IT Act and IPC section 354-C (voyeurism).

The girl who was detained shared her own video with someone who claimed to be from Himachal Pradesh, whose role is also being investigated, according to preliminary investigation, the police officer added.

Bhagwant Mann, the chief minister of Punjab, demanded an investigation and expressed sorrow over the happening. Those found guilty would face strict punishment, he said.

A high-level probe has been initiated into the event, and whomever is found guilty would face heavy punishment, said Mann in a Punjabi tweet. “Sad to hear about the tragic incident at Chandigarh University…our daughters are our honour,” he said

Mr. Mann urged people not to heed rumours while stating, “I am in touch with the administration

Arvind Kejriwal, the chief minister of Delhi and the national convener of the Aam Aadmi Party, warned individuals responsible for the incident would face severe punishment.

“A girl made offensive films of several female students at Chandigarh University and spread them online. This is a terrible, disgusting situation. The strongest punishment will be meted out to all of the offenders implicated. Victim girls must maintain their bravery. We all support you. Everyone should exercise patience, he said in a Hindi tweet.

“At the preliminary level, we investigated and could not uncover that tapes of other students were made,” Dr. Arvinder Singh Kang, director of Chandigarh University’s Student Welfare, said. “University officials registered a FIR into the incident in order to conduct a fair inquiry. There is no truth to the rumours that 60 students had MMS and that several students had tried suicide.

Harjot Singh Bains, the minister of education for the province of Punjab, urged the university’s students to maintain their composure and reassured them that the guilty would not get off easy.

It’s a delicate issue that affects our sisters’ and daughters’ dignity. We all need to exercise extreme caution, even the media. It is a test of our culture as a whole, Bains wrote in a tweet.

SSP Soni urged people not to believe such rumours and said that no instances of attempted suicide by female students had been reported. He also said no death took place in connection with the incident.

In response to a different query, Mr. Soni stated that forensic evidence was being gathered in the case.

Manisha Gulati, the chairperson of the Punjab State Women Commission, arrived at the institution to evaluate the situation. I recognise the worry of parents, and I want to reassure them that the police are looking into the issue, she said.

“The motivation behind why the woman who made the video must be thoroughly investigated. Investigations are ongoing to determine whether or not she recorded footage of additional girls, according to Ms. Gulati.