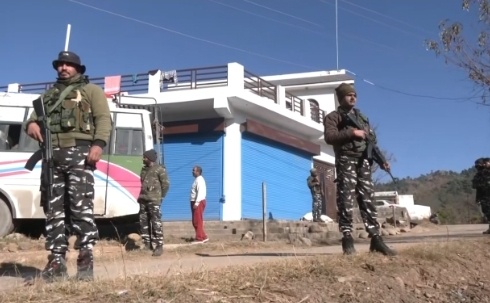 RAJOURI, Jan 5: Central Reserve Police Force jawans have arrived at Upper Dangri village in Rajouri for deployment following the killing of 6 civilians in a terror attack.

After the killing incident on January 1, the locals of the Dangri village had demanded the deployment of forces to boost security in the area.

The Home Ministry had issued an order to deploy an additional 18 companies of CRPF.

Approximately 1800 CRPF Jawans would be sent to J-K, in the wake of recent killings of civilians in two fresh terror attacks in the Rajouri district.

“I express my gratitude to LG sir and the Centre for the quick action and the deployment of forces will boost the morale of the locals”, Sarpanch of the Upper Dangri village, said.

“The Villagers demanded security & LG said our security-related demands would be met within 7 days,

“We thank LG and Centre for their quick action. There was an atmosphere of fear in our village. The morale of the villagers would boost with the deployment of the companies,” he said.

“The police have become more active after this incident. The first company of CRPF has come,” he added.

There were 6 persons, including two children, killed and many more injured in two separate terror attacks in Dangri village in Jammu’s Rajouri district on Sunday evening and Monday morning.

“I have cautioned locals about another suspected IED spotted in the area near Dangri, which is about eight kilometres from Rajouri town”, ADGP Mukesh Singh.

“We got information that the explosion took place near the house where four civilians were killed and many more injured by terrorists in a shooting incident on Sunday evening”, Officials said.

In the first attack, two armed terrorists barged into three homes separated by a distance of around 50 metres from each other on Sunday evening and opened indiscriminate fire.

The attack led to the killing of four civilians and injuries to six others.

These separate attacks are the third such incidents of civilian killings in Rajouri.

These attacks happened two weeks after, when two people were killed outside an Army camp on December 16.