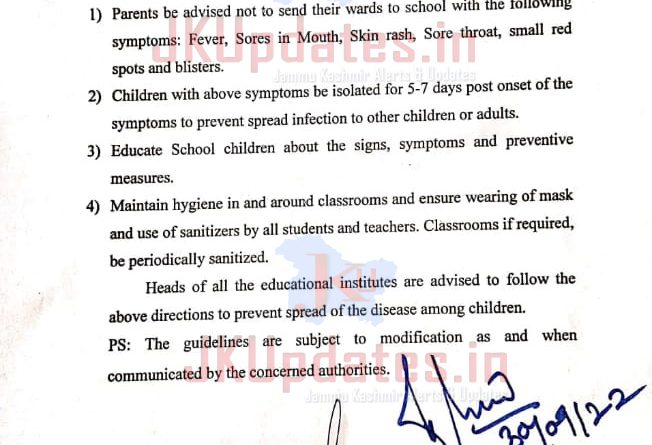 A total of 13 kids are infected with Hand, Foot and Mouth Disease (HFMD) at Mallinson Girls School Srinagar.

According to the official announcement from the District Surveillance Unit, IDSP Srinagar, there has been an outbreak of HFMD at the school, and the first instance was discovered on the 9th of September within the age range of 4 to 5, according to the report of .

Hand-foot-and-mouth disease is a mild contagious viral infection that is prevalent among young children.

The symptoms include sores on the mouth as well as an itch on the feet and hands. Hand-foot-and-mouth disease is typically due to coxsackievirus.

The blisters or rashes usually appear on the foot, hands mouth, forearms, and forearms, and that’s why the condition is named. A group of doctors went to the schools and discovered children who were suffering from HFMD. The doctors discovered that some children had fevers, a the appearance of a rash, lack of appetite, a vague feeling of feeling sick (malaise) along with sore throat.

“Administration of the school was recommended that the infected children remain away from the institution for at least 10 days from onset of symptoms and must be allowed to join back after full recovery,” is the official communiqué.

In addition, the Health Staff was advised to remain vigilant about the situation and to report it.

“Principal as well as Teachers and Supervisors were notified to watch for children suffering from fever blisters or rash on their palms or souls and to immediately isolate them. Screening prior to coming to school is highly recommended. If there are any further instances, they should be reported immediately. A warning about the illness was also sent to the school concerned,” reads an order 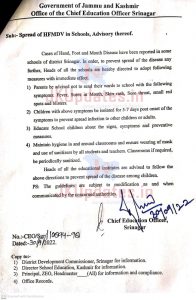